There are now a few different modes for you to play in Dying Light. With a very active community, there is always a lot of talk and suggestions for additional modes to be made available.

If you are looking for a title that you can play with a friend(or friends), look no further! Techland’s vision for this game has been built heavily around cooperative gameplay. So much so, that playing in single player mode can sometimes be overwhelming.

These are just a few ideas for fun ways to interact with the environment. There are a lot of fun and creative ways to get by. A lot of which can only be pulled off by having others to help you out.

That being said, this game can be completed without the help of anybody else. The coop factor is only there to add enjoyment. You are never forced to bring another player to discover areas.

The online matchmaking has a lobby for you to screen which games you’d like to join. There are a few options to help you choose what kind of game you are looking for.

As more content continues to surface through free updates, new game modes are also coming out.

If you complete any story missions, they will be counted as completed for when you load your local save. You are free to join a game at any part of the story.

While you play in other people’s games, you will still earn experience and keep every item you find.

There are quite a few different types of zombies that you will encounter. The simple slow and dumb zombies can look similar to it’s stronger counterparts. This can keep you on your toes when entering a battle. Some zombies will look easy to take on, but will quickly display some abilities that could be very threatening.

There is also a big difference between the encounters you find during the night and day time. Here are just a few zombies to show what you can expect to encounter in your play. Note: These are just the most common zombies that you will find. There are other, much more threatening zombie types. One of the most exciting parts of this game is being taken by surprise by something you haven’t seen before. 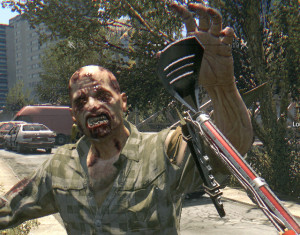 These zombies come in many different shapes and forms. They mostly resemble a mutated human being. They can be male or female, small or bulky. Sometimes you’ll find them missing some limbs. They are usually pretty weak, but can become very dangerous when confronted by many at once. They are also very threatening because they look exactly the same as the more improved version of themselves. Be careful not to get them mixed up. The stronger version can run and climb and is very sensitive to any noises. 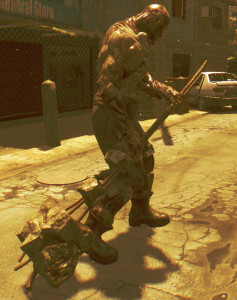 Call him what you want. Tank, brute, thug, hammer zombie. He can take you out pretty quick. He barely moves, and has a ton of hitpoints. If you get close enough, he will take a big swing of his hammer towards you. If you haven’t unlocked much health perks yet, this will definitely kill you in one hit. Later in the game, you will only maybe survive a hit from this monster. When playing with friends, it is a good idea to have one friend bait him, while the other sneaks up and takes hits from behind. If you have a gun and some ammo, he can die pretty quick with a few good headshots.

Or gas-tank zombie. These zombies are immune to elemental damage. They are well protected against fire and toxic damage. They aren’t very powerful, but they do require a bit of gentle precision. The gas tank that is strapped to their back will explode if it is hit. The explosion is very powerful and will kill the zombie, and probably take you with him. It can be very beneficial to lure a lot of zombies near him and then trigger the explosion.

Techland’s initial zombie survival game. Dead island is an incredibly addictive game that is made almost exactly like dying light. When compared, it feels like an early access version of dying light. A or of the core mechanics and zombie enemy types are similar. There is a lot of material and resource gathering that is used for crafting. Just like dying light, this game is best enjoyed in cooperative multiplayer.

Riptide is sort of an unofficial sequel to the original dead island game. It isn’t required to play the first game, but the story does continue from where dead island left off. This game brings a few new game mechanics. Thrown weapons are much more accessible, and there are outposts that need to be liberated before using their facilities. This is a much more difficult version of the dead island game, with darker atmospheres and more challenging maps.

During E3 2018, Techland developers showcased their debut of Dying Light 2. This has generated a lot of hype for fans of the dead island and dying light franchise.

As of right now, there is no official release date for Dying light 2. The only information that has been released in terms of a release date has been that Techland is hoping that everything will be ready to roll out in 2019. Luckily, we have been given an ample amount of information about what we can expect to see.

The presentation at E3 was a decent length with fantastic commentary to describe everything we are seeing. This was definitely more than just a teaser trailer. This has left a lot of us with even more questions. Although there was a huge display of what to expect, they still managed to keep a lot of the story element under wraps.

As with any successful franchise, as soon as you see a sequel being picked up, you can almost guarantee that there will be another game after that. Game developers follow a pretty tight knit sequence for the entire development process of their games.

At the moment, the stage that dying light 2 is on will tell us that they are fully focused on developing that title. It won’t be for a long time until we hear anything substantial about another dying light coming out until the sequel has already been out for some time.