Trading in Rocket League has become one of the best ways to get your hands on some of the coolest cosmetic items. Everything from battle cars to special boost trails to toppers(hats).

Every time you complete a match on the official Psyonix servers, you have a chance to be rewarded with a cosmetic item. Sometimes these items come with special attributes that makes the much more valuable. Alongside the item drop rate is the chance to receive a loot crate. 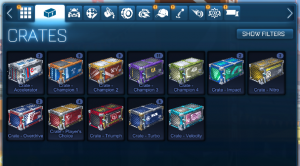 Loot crates can only be opened with keys, which need to be purchased for real money. There are several different editions of crates, and each has their own respective drop table. Some loot crates have highly sought after cosmetic items that some players will pay a pretty penny to take off your hands. If you happen to have one of those rare items, and it received a special attribute, you may be looking at some profit!

The prices for every item changes almost weekly. The more people are playing, the more common every item becomes. The most valuable items will be the newest ones. The way the community prices out the items is done in keys. Since keys have to be purchased with real money, you can do the math to figure out every items real world value by seeing how many keys that item is going for right now.

Just a few seasons ago, Psyonix has begun to reward players with cosmetic items that are relevant to the highest rank they finished in for that season. Additionally, players also receive all the items for the ranks below their highest achieved rank.

Sony has kept a firm stance on their position to disrupt all communications with other platforms. Being a huge cross-platform hit, Rocket League has been able to tie in multiple platforms to allow the community to not only play together, but to trade together. Because PC players are allowed to trade with any other platform, this gives them an edge over PS4 players. You see, PS4 players are only allowed to interact with PC players.

For that reason, the prices for items on PS4 are higher than any other platform. If you wanted to get an item that an Xbox One player owns, you’re going to have to get it through a PC player that traded the Xbox player. Why doesn’t Sony just let you interact with other platforms? This is the question everybody is asking.

What Is The Best Car To Use? 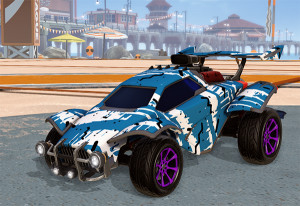 This is one of the biggest arguments since the beginning of Rocket League’s existence. There have been many studies conducted to expose the tiniest of differences between battle cars. It is often repeated that every car is built the exact same way, and there is no difference which car you choose. For many players, the best car is the rarest car.

If you ever watch any tournament games, you will notice that everybody has to use the same car: Octane. This is argued to be the most efficient car for hitting the ball, especially during aerial plays. It is the very first car that is available to players, and it is arguably the most reliable across every style of play.

Items in Rocket League all have different rarities. This is a direct indicator of how rare your items are. After playing long enough, you will come to realize that there are some items that you may never see unless you trade for them. The range for all rarities is highly depends on current market value. Below, you will find huge key ranges for value because some items are worthless while others are worth a fortune. Some players may ask that you trade a handful of items to make it more worth it for them.

Below is an edited version of a wonderful rarity guide written in the form of a comment by reddit user u/orangetime88 on the Rocket League reddit page.

Trade value is determined by several factors. One of the biggest deciding factors is whether or not the item came from a crate. This means that a player had to have spent at least $1 to obtain that item. As more and more players obtain that same item, it’s value starts to decrease rapidly.

The next biggest deciding factor is which crate that item came from. New crates are always being introduced. With new crates come new items. There are usually a few common grade items, some rare, even less very rare, and usually one or two exotic body cars. The cars are often the most valuable reward out of a loot crate. The newer the crate, the less supply there is of that item. If you are looking to collect lots of rare items, it is a good idea to open up the newest crate. There is a small chance that you will unlock a skin that very hot in the market. Doing so will open up a lot of doors for when trying to obtain many rare items that you may have missed from before.

The final deciding factor when determining your item’s trade value: Attributes. More specifically, whether or not your item is “Painted”. 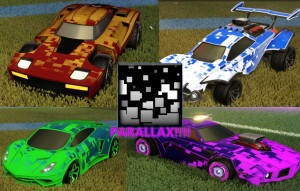 This item is listed under Black Market in terms of rarity. That makes it extra difficult to obtain it. The going rate for this item has always hovered somewhere between 7-10 keys.

Some items come with a special attribute. Each one has it’s own specific name. The stats that your item will track will be randomly decided(if your item even gets the attribute, that is). They track all sorts of things.

Those are just to name a few. This feature doesn’t exactly increase the value of an item considering the fact that it doesn’t alter your car in any way. There is one significant attribute that takes precedence over any other value, and that is the item’s paint attribute.

Finding the proper price list can come down to two major sources. You could either track down the current community market value on the steam discussion board, or use a price tracker website. As with all trading communities, it is highly recommended to use the forums for the most accurate estimation. Price listing websites build and inventory by buying low and selling high. You may like the convenience of a price tracking website, but the real and fine tuned price will be reflected in trades that happening right at this moment.

The price for keys has always been the same. They are sold in different packs that don’t really offer much benefit if you want to buy more. The only real loss of value is if you buy keys one at a time.

As you can see, the value of each keys is roughly one dollar per key.

Rocket League has many different styles that make up your “player skin”. The level of customization is fairly fun, which is why most players actually have an interest in acquiring new and rare skins for their cars. These skins vary from car to car. You can even unlock new cars. There are certain items, such as hats, wheels, boosts, and toppers. These items can be applied to any vehicle. Some items, such as decals, are vehicle specific. You will need to unlock each car’s special decal to use it on that car. There are some decals that work on multiple cars, or ever car universally. 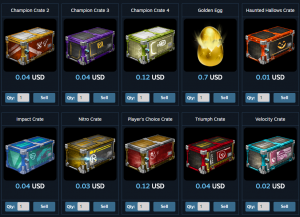 Some trading websites make money from buying your items through the use of a trading bot. This is a computer controlled user that will facilitate a trade automatically. You simply choose all of the items that you have and are willing to sell, and they will buy it from you for real world money. They make money from doing so by re-selling your items for a higher price. They can also afford to unlock their own rare items by opening crates and trying to get items that are rare and worth more. If you don’t want to gamble to try to get a valuable item, or you just don’t have the time to find people to trade with, then this may be a good option for you.